A Collaborative Exhibition By Visual Artist 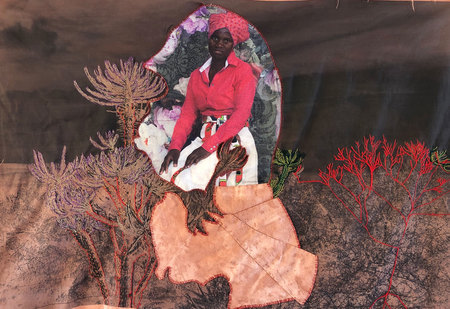 Memory is a tapestry of relationships. The exhibition Cuttings 1820 – 2020, constructed around themes of family, cultural memory, displacement and loss, explores the difficulty of disentangling our shared histories.

Textiles, clothing and portraiture are placed in conversation with each other, in the process forging new identities and configurations. Pivoting on the relationship between female descendants of the Eastern Cape Xhosa nation and of the 1820 British Settlers, this collaborative exhibition incorporates dressmaking, embroidery, assemblage, video and photography.

In the process it also connects us to the feminine, and particularly to the strong female identities so often neglected in historical storytelling. The sensuous fabrics create a tapestry of new relationships, bringing us closer to what we have lost, but also to what can be created anew, binding us simultaneously to the past, present and unfolding future of our country.

The ocean in Sea.Clay.Memory embodies both promise and loss. Ships at sea were modes of transport for the European settlers travelling to the Eastern Cape. The sea is a symbol of flux, impermanence, hostility and hope, while the ochre clay evokes a sense of place, of embodied belonging, of the feminine, of spilt blood, of the past and the present.

Reparation expresses the female voice that has been lost in history and the dream of restoration. The use of the stitch is both subversive and feminine. It can mend and heal but can also hurt and separate.

Q & A Session With The Artist

Join us on Zoom for a Q&A session with the artist on 19 August at 18:00. To book your spot, please send us your details via email at manager@gfiartgallery.com 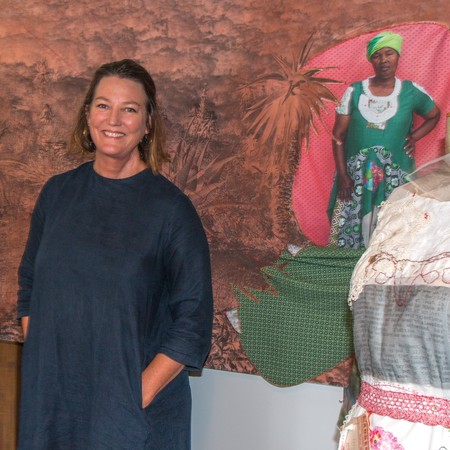 Hetherington obtained a Masters in Fine Art through the International Center of Photography-Bard College, New York, USA. Her work invites questions around family, history, cultural identity and memory. Working with photography, video documentary and textiles, she explores untold stories of loss and remembrance. She is co-founder of Behind the Faces, a pan-African women’s storytelling project, launched at Constitution Hill, Johannesburg, in 2013. Her work has been published in international and national publications. In 2012 she established an online photographic archive, available through Africa Media Online. She has been represented in solo and group exhibitions in Cape Town, Johannesburg, Bloemfontein, Durban (South Africa); London (UK); Dublin (Ireland); New York City and Washington, DC (USA).

Founded in 2000, the Keiskamma Art Project in Hamburg, Eastern Cape, showcases alluring textile works, beadwork and wireworks, all of which aid in the archiving of the Eastern Cape rural collective memory and preservation of oral history. The Project has won a number of awards, including the Business and Arts South Africa (BASA) Award and the Chairman’s Premier Award (2011) which recognises sustained and extraordinary commitment to the arts in South Africa.

The Projects’ major artworks are found in several national and international collections, including the parliament buildings in Cape Town as well as the permanent collections at the University of South Africa, the University of Witwatersrand and the Nelson Mandela Metropolitan Museum. The Keiskamma Art Project also provides income and other forms of essential support for many families through its cohesive network of women and youth.