The building was designed by Gertruida Brinkman, the first woman architect to graduate in South Africa, and is one of the most significant examples of regional Early Modern Architecture in Port Elizabeth. Axel Stockelbach, the Danish-born managing director of Ford South Africa and the man indirectly responsible for the decision of the motor industry to locate in Port Elizabeth in 1923, commissioned the design of the house. Construction was completed in November 1936.

The Art Deco house, named “Ridgewood”, was designed in Early Modern Style. In architectural circles the house is known as “House Stockelbach”. It stands on two plots, comprising 2,900 square metres and overlooks the scenic Fern Kloof of Settlers Park. The “Modern Era” followed shortly after the notorious share market crash of 1929 and ran concurrent with the years of the Great Depression. In comparison with the “Roaring Twenties”, it was a bleak decade and this bleakness is reflected in the buildings.

The “Modern” architects set out to create the most basic of buildings with only the most essential of decorations. The streamline elements found in the Early Modern Architecture of Port Elizabeth were an adaptation of the American Streamline Style. Port Elizabeth enjoys plenty of sunshine and only the wind detracts from a nearly perfect climate. Because of this wind, roof terraces, which were intended as additional living spaces, were seldom built.

House Stockelbach’s roof terrace provides panoramic views over the city and towards the airport over Settlers Park. Importantly, it is the only Early Modern residential property built in Port Elizabeth with a roof terrace. At some stage, between 1962 and 1988, a portion of the terrace was enclosed. Mrs Brinkman provided a number of alternate patios and balconies. This gave the residents a choice of entertainment areas.

Other features of House Stockelbach were the segmentally curved corner windows in the original lounge and in two upstairs bedrooms. Steel window frames were used as this allowed for greater flexibility than wooden windows. Another feature is the rounded sculptural form of the building. Mrs Brinkman successfully incorporated a curved balcony wall and also used a horizontal/vertical format in the composition of the north facade.

A vertical fin, known as the Art Deco Fin, was used as a means of linking elements together on the facade. All the door frames and support beams also feature geometric designs. Inside the building, elaborate Art Deco style ship rail balustrading was incorporated with great effect. In 1962 the property was sold to Mr Abe Karstaedt and was known as the “Karstaedt House” for many years.

Mr Phil R Gutsche purchased the house in August 1988 and commissioned Londt, Knight, Fieggen, and Moors Architects, to convert it into two apartments. The conversion incorporated an additional double garage and a front entrance for the first-floor apartment. This apartment was approached by a grand curved staircase in the style of Early Modern architecture.It was Mr Gutsche’s wish, in 1998, that the residence be converted into the Ron Belling Art Gallery to house the Belling collection of Aviation Art.

Further alterations by Tony Moors of Moors, Milne, and Kievit Architects, were completed in 1999, with the eastern double garage being converted into an air-conditioned gallery. The open courtyard between the two double garages and the staircase was roofed over with clerestory light and converted into the gallery’s entrance hall.

The original solid brass Art Deco front door was moved from the house and repositioned at the entrance to the art gallery. In keeping with the architectural style, the architects utilised a most appropriate Art Deco sculptural lettering for the signage on the outside of the gallery.

In 2016 further renovations were done by Tony Moors of Moors, Milne and Kievit Architects. These consisted of forming a glazed direct link between the entrance of the gallery and the rear of the building. The rear of the building now contains the boardroom, offices and further exhibition space.

At present the GFI Art Gallery still functions as a permanent home to the Ron Belling Military Aviation collection of oil paintings as well as a commercial space promoting artworks by South African artists. 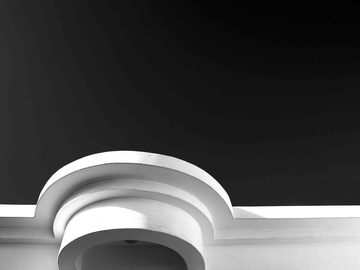 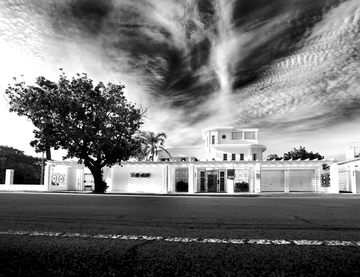 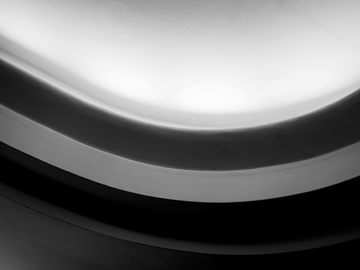 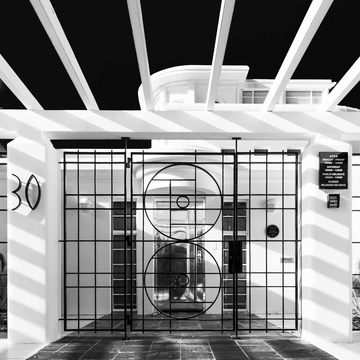